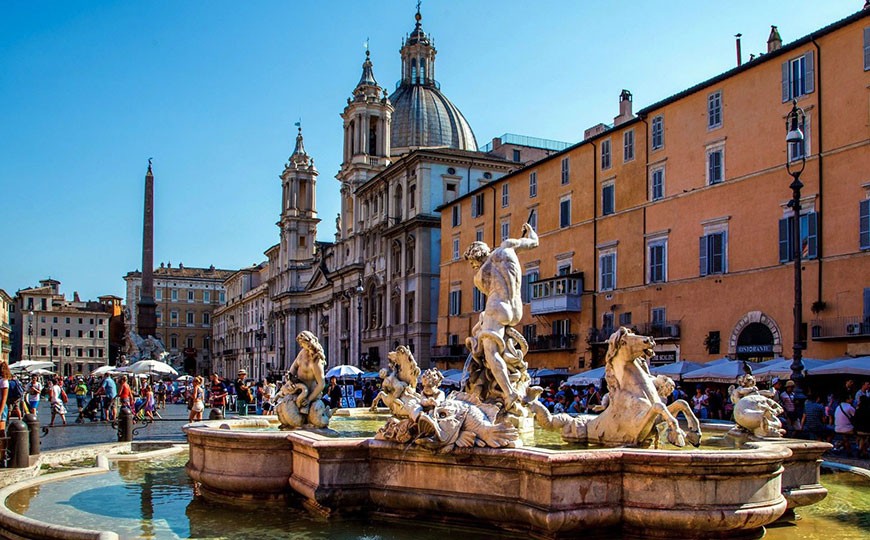 The square, in baroque style, rises in a area where, in Roman times, public games took place. In fact Nerone (54-68 a.C.) had an amphiteatre built that the Emperor Domiziano transformed into the great “Circus Agonis” made of travertine and bricks. The great stadium, whose lengthened shape is kept in the present square, measured 275 meters in lenght and 106 meters in breadth, it could hold 30.000 spectators.

Like many others ancient monuments, the architectonic structures of the “Circus Agonis “ suffered the raveges of time and the damages of men who stole its stones and marbles in order to build the sorrounding palaces and houses.
During the XIII century roman barons’ palaces begun to rise all around the stadium that got the name of “Platea Agona” and then “Piazza Navona”. In XVI century the square took the actual conformation and Pope Gregorio XIII Boncompagni had two fountain built in the two extreme corners of the square: "Calderari" fountain in the north side and "Del Moro"one in the other.
About in 1645 Pamphili Palace and the church of S.Agnese in Agone were built. The church construction begun under Rainaldi’ s design and after was changed by Borromini. In 1651 Bernini executed in the centre of the square the fountain of the"Fiumi" sormounted by an obelisk coming from “Circo di Massenzio”.

In this place centuries of history have passed since the oldest times,when spectators acclaimed the athletes competing into Domiziano’ s stadium; during Middle Ages and Renaissance the square was used as a theatre for various popular events like, for instance, joust of knights and bull and buffalo fights.Till 1867 every week-end in August it was habit to flood the square as a real lake. Nowadays the square is visited every day by thousands of people expecially during Christmas holidays, when a traditional market is held where you can find sweets and gifts, in memory of the permanent one held from XVI century till the beginning of XX century.

Church of Sant' Agnese in Agone

The church is located on the west side of the square, it was built between the VIIIth and the XIIth century in the place where, according to the tradition, the Saint was put to the stocks, completely bare, and prodigiously she was covered by her loosed hair.

The present construction was started by Girolamo and Carlo Rainaldi in 1652 under the pope Innocenzo X and was finished by Francesco Borromini who radically changed the project building the new concave front with columns and pilasters, surmounted by the great dome; the twin bell towers were realized by Antonio del Grande and Giovanni Maria Baratta according to Borromini’ s design.
Inside the church is covered by wonderfull gold and marbless, while underground you can find the ruins of the “Circo di Domiziano”, Roman mosaic floorings and also medieval frescos.

“Calderari’s” fountain known also as Nettuno’s fountain is located in the north side of the square.

The lobate basin was created by Giacomo Della Porta in 1576 but it wasn’ t finished before 1878 when, for symmetry with Moro’s fountain, some Antonio Della Bitta’s sculpures and also some Gregorio Zappala’ s statues representing puttos, nereids and hippocampuses were added on it. Among Della Bitta’s sculptures you can see Nettuno fighting against an octopus.

"Moro’s" fountain was the first one realized inside the square and it’s located in the south side.

La Fontana del MoroThe lobed basin was realized by Giacomo Della Porta under Gregorio XIII in 1575-76, while the statue of “Etiope in lotta con un delfino” was realized by Giovanni Antonio Mari in 1654 according to Gian Lorenzo Bernini’s design and it was ordered by Olimpia Maidalchini who wanted to enrich it.
The pool created around the basin was realized by Bernini according to Francesco Borromini’ s project, while the tritons, the masks and the other ornaments are copies realized by Luigi Amici in 1874 in order to replace the original ones now located inside “Giardin del Lago” of villa Borghese.

This fountain dominates the center of the square; It was built in 1651 by Gian Lorenzo Bernini , who conquered the favour of Innocenzo X at first hostile to him.

The fountain is sourmounted by an obelisk coming from “Circo di Massenzio” and in the center of the basin, that is feed by eight trikles of water, rises a rock-like base with a lion and a horse watering. Laying at the four corners, there are the great personifications of the Niles (Giacomo Antonio Fancelli) of the Ganges ( Claude Poussin ), of the Danube ( Ercole Antonio Raggi ) and of the Rio della Plata (Francesco Baratta). A popular legend atributes to their gestures meanings of rivalry between Bernini and Borromini.